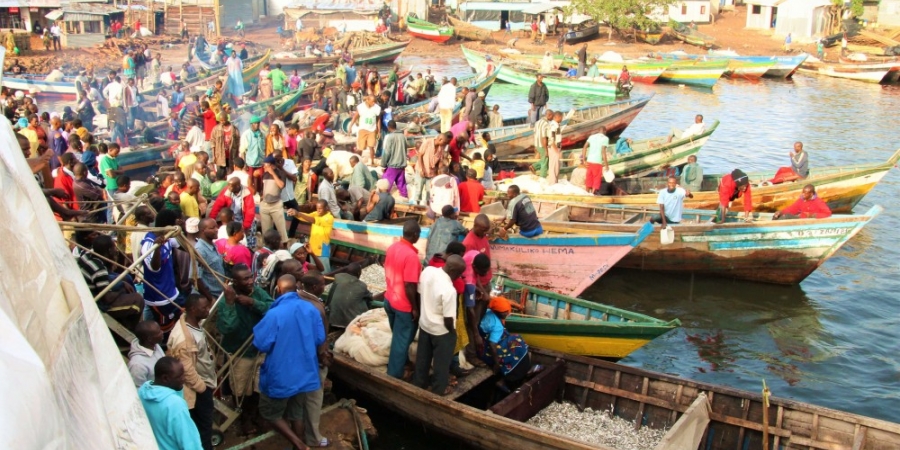 I have recently returned from Tanzania, where I was working on-board the Jubilee Hope Medical Ship on Lake Victoria. The ship is an ex-Naval vessel which was sailed on an epic journey all the way from Glasgow, around the Cape of Good Hope and up to Mombassa. It was then cut in half and taken by road to Lake Victoria, where it was rebuilt and sailed 36 hours across the lake to Mwanza.

The ship has been operating out of Mwanza for 9 months, serving the island communities of Lake Victoria who would otherwise have little or no access to medical care.

On each 2-week expedition, a team of Tanzanian medical workers are joined on the ship by volunteers from the UK, and together they provide primary medical services to the local people, most of whom are from fishing communities.

On my expedition there were 4 UK volunteers - 3 from Scotland, and myself from England. 3 of us, including myself, are retired doctors, while the 4th UK volunteer is a teacher.

We soon got used to life on-board the ship and got to know each other as we motored through the night to our first Island, Karebe. The lake is huge, and being on the ship is just like being at sea. Luckily it was not too rough!

We woke the next morning to find ourselves anchored near a village, with the rain falling hard and cold - not the weather you'd expect in the middle of Africa. 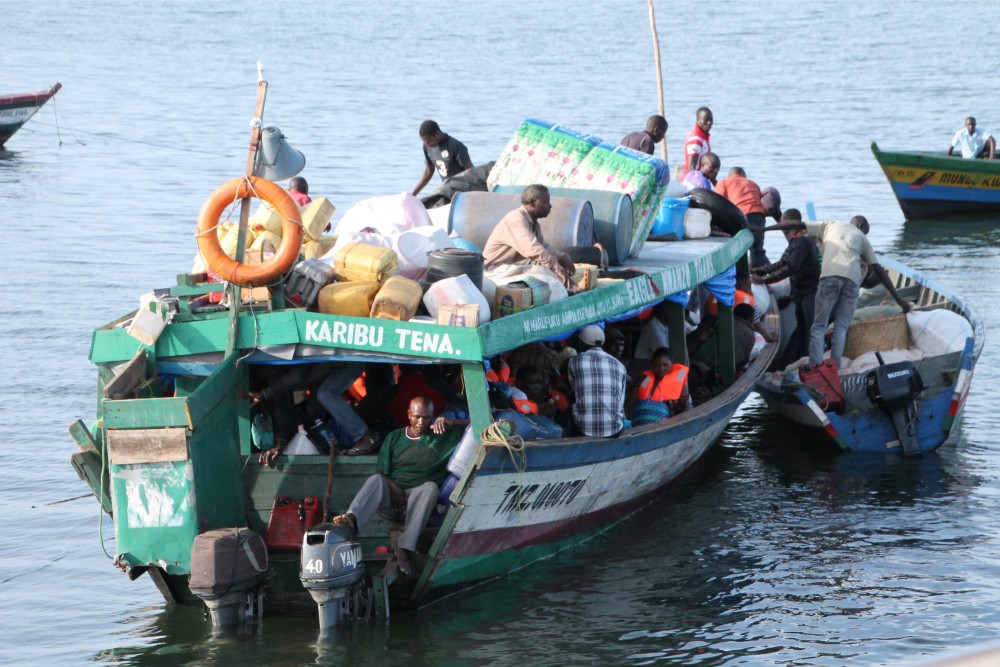 We went ashore in the rain to introduce ourselves to the local village chiefs, which we did with some ceremony in the "office" - a small corrugated iron building. We each said who we were and where we were from, and then signed the record books for the two villages. Formality, we were discovering, is very important in Tanzanian culture.

We then met the local the community and introduced ourselves again. The fact that the teacher from our team was married to one of the doctors went down extremely well with the crowd, and an even louder cheer went up when they had a public embrace! The people were extremely friendly and welcoming - the ship is very popular with the villagers.
There was then a Health Education talk before we headed back to the boat as patient registration began. There were a large number of patients to be seen, and they were all triaged to ensure we saw the most urgent cases first. We got into our scrubs and prepared to begin consultations.

An HIV testing clinic was set up on the shore and patients lined up to be tested. If the first test was positive, they were given a second. If that one was also positive, they were told to attend a clinic on the mainland for further testing and treatment, and it is only there that antiretroviral medication can be prescribed. Medical supplies of the antiretroviral drugs are sent to the patient from the mainland hospital, but inevitably, not all patients continue to take them. This can lead to the resurgence of the disease and the possibility of the emergence of drug resistance.
HIV is a big part of the Jubilee Hope project, and there are a variety of social problems which both cause the spread of the disease and complicate the treatment process.

Patients boarding the ship had a variety of parasitic diseases which the UK doctors had rarely seen during our long NHS careers. Malaria was common, as were parasitic worms,  and Amoeba and Giardia were very frequently found upon testing. Negative tests for these were very rare. We had an excellent lab on board which could test for malaria, anaemia, a variety of parasites, typhoid and other infections. The lab was extremely busy every day.
We had a dispensary, and the medicines prescribed by us were given free of charge to the patients.

It was satisfying to treat patients who had so many needs, and to make a difference to their lives. The dangers they faced as fishermen were brought home to us when we learned that, during our time on the lake, a fisherman had slipped and drowned. The family gathered on the shore to mourn his loss. 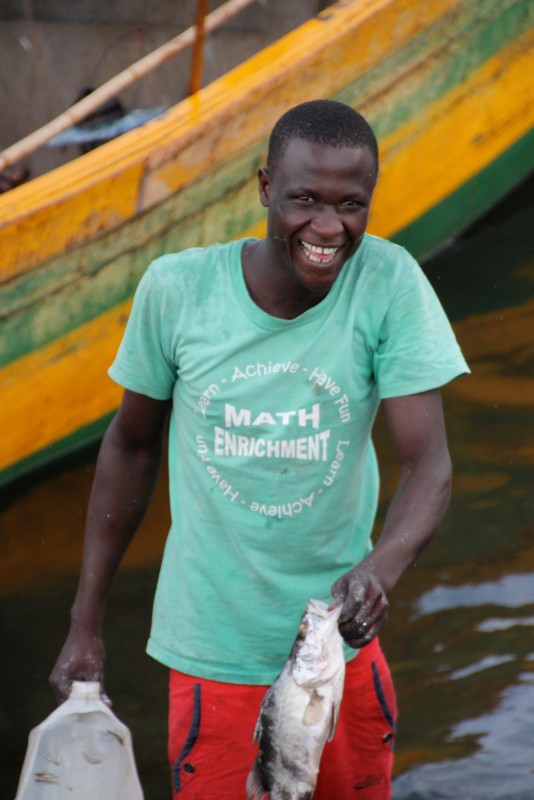 After 3 days, we set off for the next island, Goziba, which was larger than the first, and took us 3-4 hours to reach. We came alongside a pier in the village so we were moored next to all the fishing boats. The sardines were in at this island, and the trade was very brisk. These tiny fish are the main source of protein for people living in the most severe poverty. They are fished at night with lanterns floating on little rafts to attract the fish, and are sold first thing in the morning by auction. We were often woken in the early hours, 4.30am onwards, by the fisherman shouting as boats jockeyed for position alongside the pier. Prospective buyers, balancing precariously, hopped from boat to boat to get the best fish. The fish were then taken, in large bowls on top of heads, to fields where the islanders spread them to dry in the sun. At the end of the day, the dried fish were scooped up into large sacks and taken to waiting boats which carried them to the mainland to sell.

On our first day at Goziba, we went to meet the Police Chief for our formal introductions, and then to meet the local people. There were hundreds of people waiting, and they all formed lines to register as patients, with their details going down in exercise books which they would then keep as patient held records.

We had several very sick patients. One woman, who had been in labour for 3 days, had taken some herbal medicine, which is the custom there. She eventually delivered her baby boy on the boat without any form of pain relief. This is accepted medical practice all over Tanzania and Kenya, I was informed afterwards. I had a few things to say about this, having had 5 babies myself! It is an indication of the relatively low status of women, who apparently should just grin and bear the pain of childbirth. The mother and child both survived and we saw them both for a checkup 2 days later. The outcome may not have been so favourable had the ship not been there. 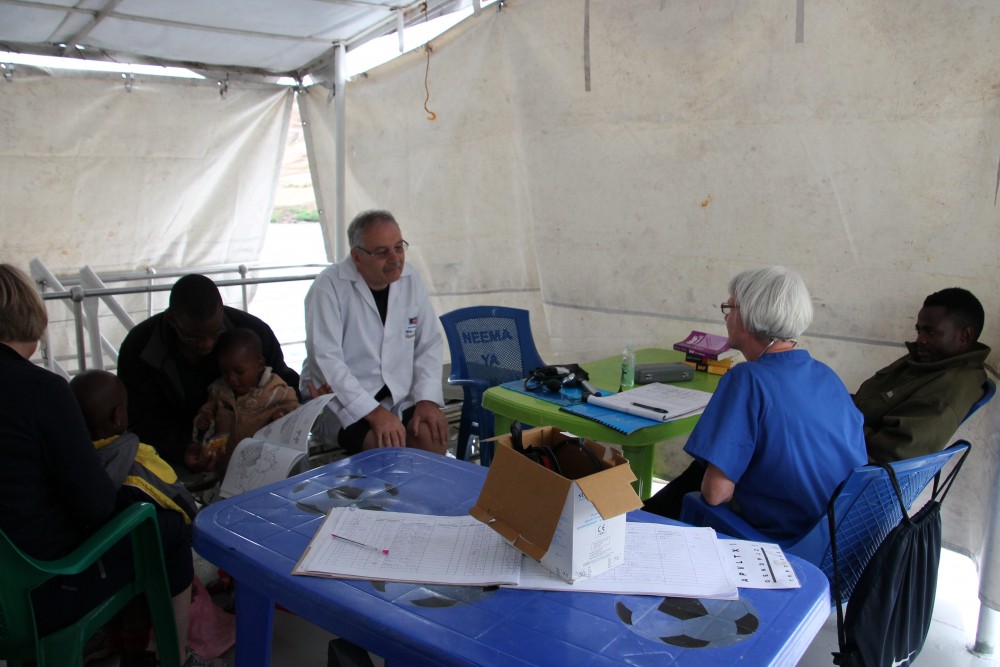 We had two patients who had been attacked and were lucky to survive - one with a very long knife wound down his back, and another with a head injury and two broken arms. The police were informed in both cases. Alcohol played a part in both these events, and the next day I gave a talk on alcohol and drug addiction at the Health Education Session, which was translated into Swahili. It was the first time this subject had been discussed at a Health Education Session and it was apparently well received.
There are many factors which contribute to the use and abuse of alcohol in these communities, including the risks involved in the fishing industry and the plentiful supply of very cheap and very strong beverages. The consequences include becoming the victim or perpetrator of violence, including domestic violence, and indulging in "at risk" behaviours, with personal and public health issues as a result.

During my time on Jubilee Hope, I saw many medical cases which I had never seen before. I learned so much about practicing medicine in a completely different culture and at a level of poverty I had simply never before experienced.
The people I met were gracious and dignified, despite their considerable suffering, and were so grateful for our help. It is one of the most rewarding things I have ever done, and the experience is unique and special on so many levels.

I for one will never forget these so called "forgotten" people of the Islands.
I plan to go back again next year.