After three flights, a ferry, and two buses, we arrived at Sengerema where we are staying. Our first impressions - somewhat chaotic at the airport; busy; warm; friendly; strange geological rock formations which were amazing plus the land is very green. We are all getting used to either cold showers or scalding hot; some even have boutique toilet facilities know within the group as either a hot or a cold drop!

The people have given us a very warm welcome especially the children who have followed some members of the party, no names, like The Pied Piper! First day on site was today  where we received the formal welcome with lots of singing and dancing which was fabulous. 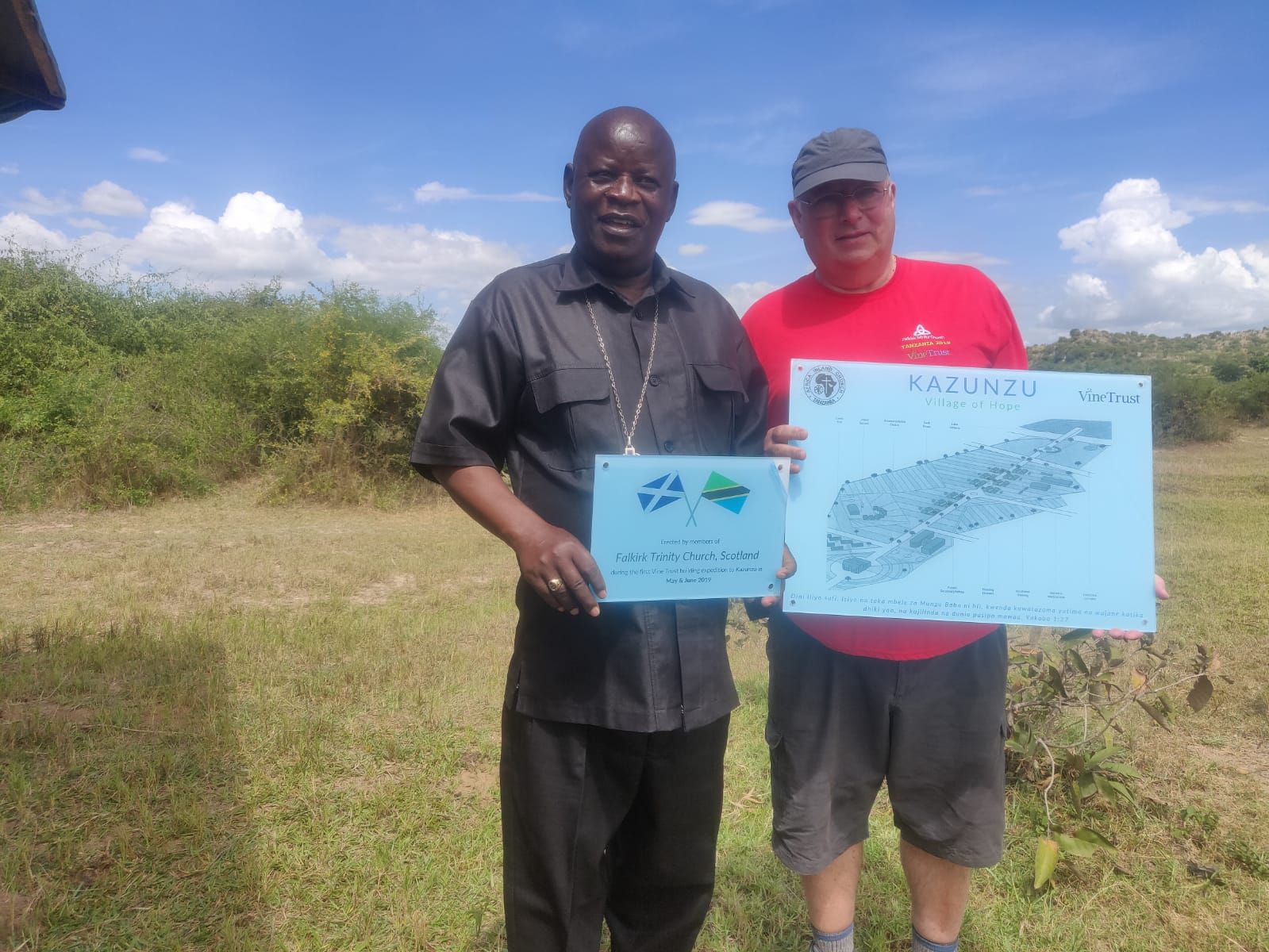 Bishop Dr Peter Kitula led short service of dedication for this project. Iain presented a commemorative plaque and plan of the site which will be mounted on a cairn on a hillside overlooking the site. The Falkirk group then said the Lord’s Prayer and sang “Amen Siakadumisa”.  This was completed by a procession down to the first house site where the symbolic foundation stones were laid. This was a longish process but valuable-we are learning to adopt Tanzanian “Pole Pole” time, this means slowly slowly.

With the help of a lot of children we carried buckets of water from the reservoir in a human chain to the first two houses, although hard work there was lots of laughter and sweat.

A couple of hot days on site at Kazunzu. Some cloud and a slight breeze, but even so we all felt it hot while working. On our bus journey to the site, the children rush to the bus waving very excitedly. We’re not quite sure if it is us they are happy to see or the bus.  En route we bought more buckets and some tools – buckets play a big part in our lives!

For most of us, the construction support was carrying buckets of water, moving boulders, mixing and moving cement and even some building and cementing the foundations when the fundis (local builders) gave us the opportunity. One of the team did so well that she became an adopted fundi!

For the sub team, the task was to build the cairn for the plaque which is situated on the hill overlooking the site. This was no mean task – carrying stones, buckets of water, sand and cement up the hill. Four of the team worked very hard there both days with John the fundi whose favourite phrase was “wakey wakey” –but this means “put it there” not “stop lying on that boulder in the sun sunbathing”! 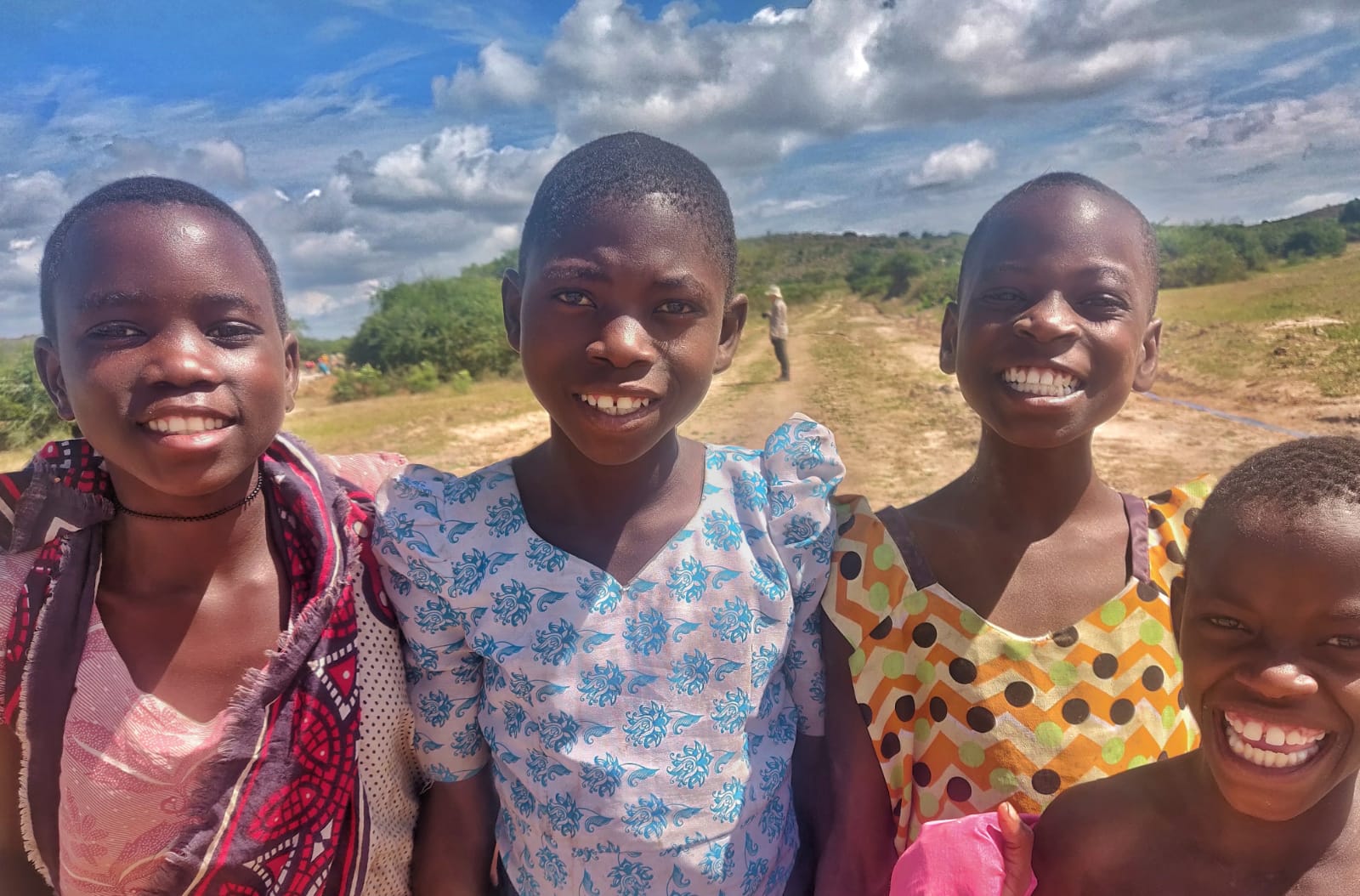 Many of the children who always appear are always smiling and happy to play games. The older children take good care of the wee ones. The women are all beautifully dressed in bright coloured and patterned dresses.

We left the site satisfied that the foundations for both houses had been completed, thanks to the hard working fundis - with a little help from ourselves. 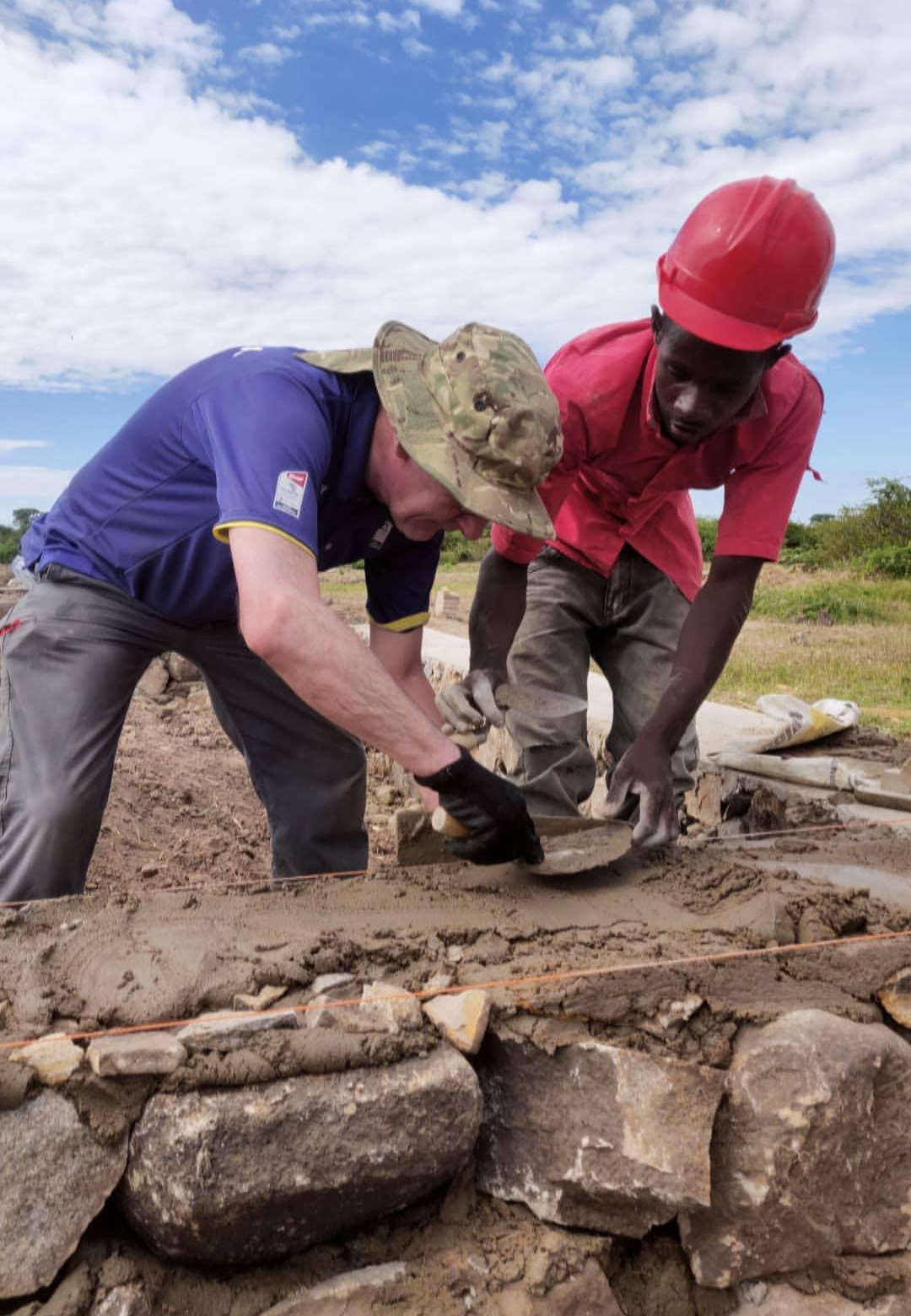 Saturday was block day. We moved several hundred building blocks weighing at least 15 kg each. We estimate more than eight tonnes shifted from one part of the site to another part. Meanwhile the fundis built the walls. Pastor Samuel remarked that the work wouldn’t have progressed so far without our help which eased the pain. 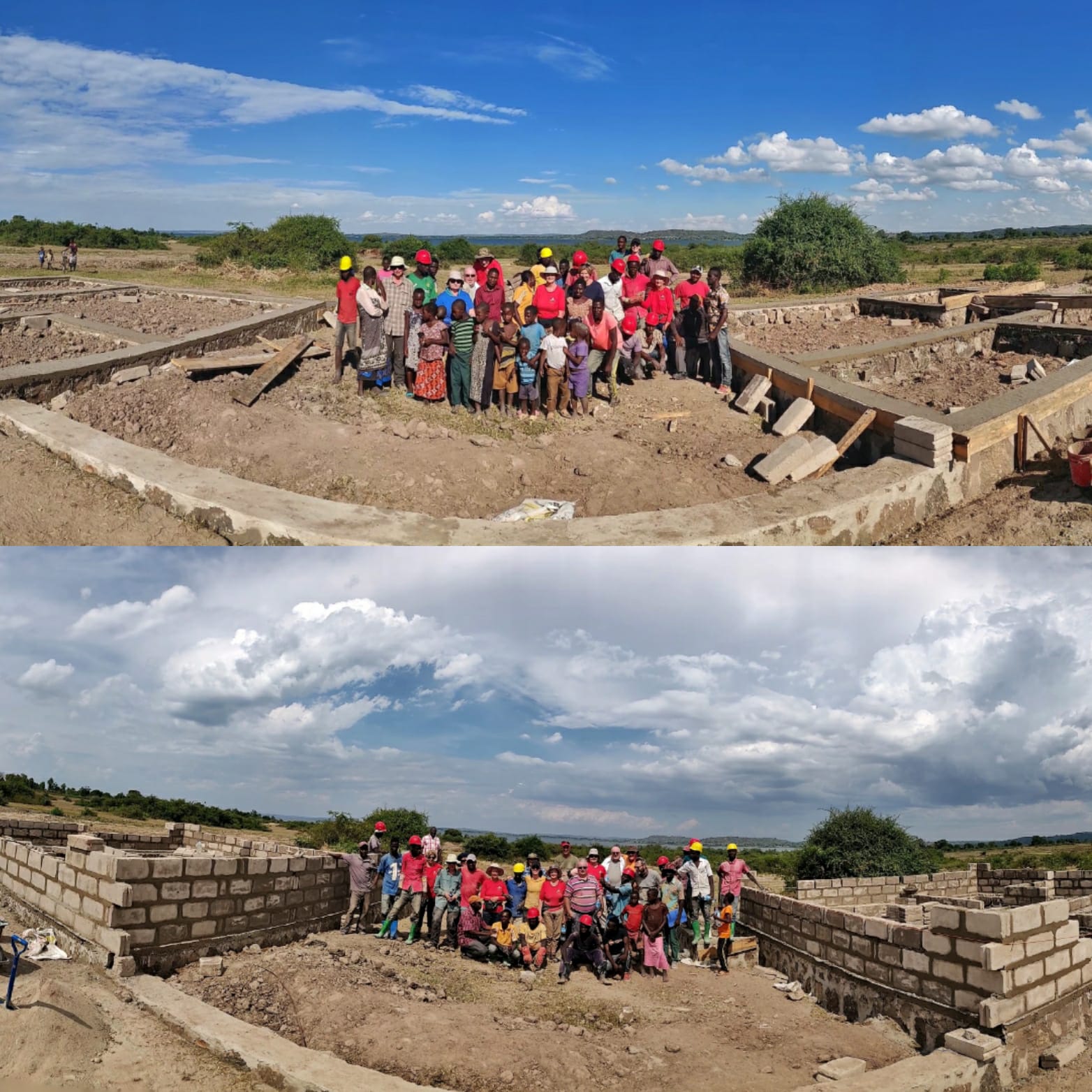 Sunday in Sengerema – day of rest – started with breakfast at 6.30am and then off to church for 7.30am!!

The church was full with people of all ages – we estimated around 1000 people for a three hour service. Lots of loud singing and energetic dancing: we started with a conga type dance and some of our group couldn’t resist joining in! We were all asked to stand at the front and were introduced to the congregation and then four members gave short presentations explaining where we had come from and why we are here. We finished with a bible reading and talk by our own Swahili expert. It was a very informal service. People came out to the front to make an offering; it was counted on the spot and then we were told that they hadn’t enough for their outgoings so could they have some more?? Maybe something we could try at our own church? Along with a choreographed dancing choir? When we left at 11am, the service hadn’t finished – they were about to start Communion. After Communion, we were invited back to the Pastor’s house for lunch, which was delicious.

An exhausting day on site today at Village of Hope. Wheelbarrows used for a rest at times!!!

The second week has gone well. The fundis struggled to keep up with the high productivity level of our team – hundreds of blocks moved, tons of soil shifted (in our bucket chain) to infill the floors of the houses, 35 trees planted (with a pick axe used to break up the ground and many trips to collect buckets of fertiliser), the walls at roof level by the time we left and many wheelbarrows of sand loaded and wheeled to the site. In fact we used up all the materials available and the building work was ahead of schedule. 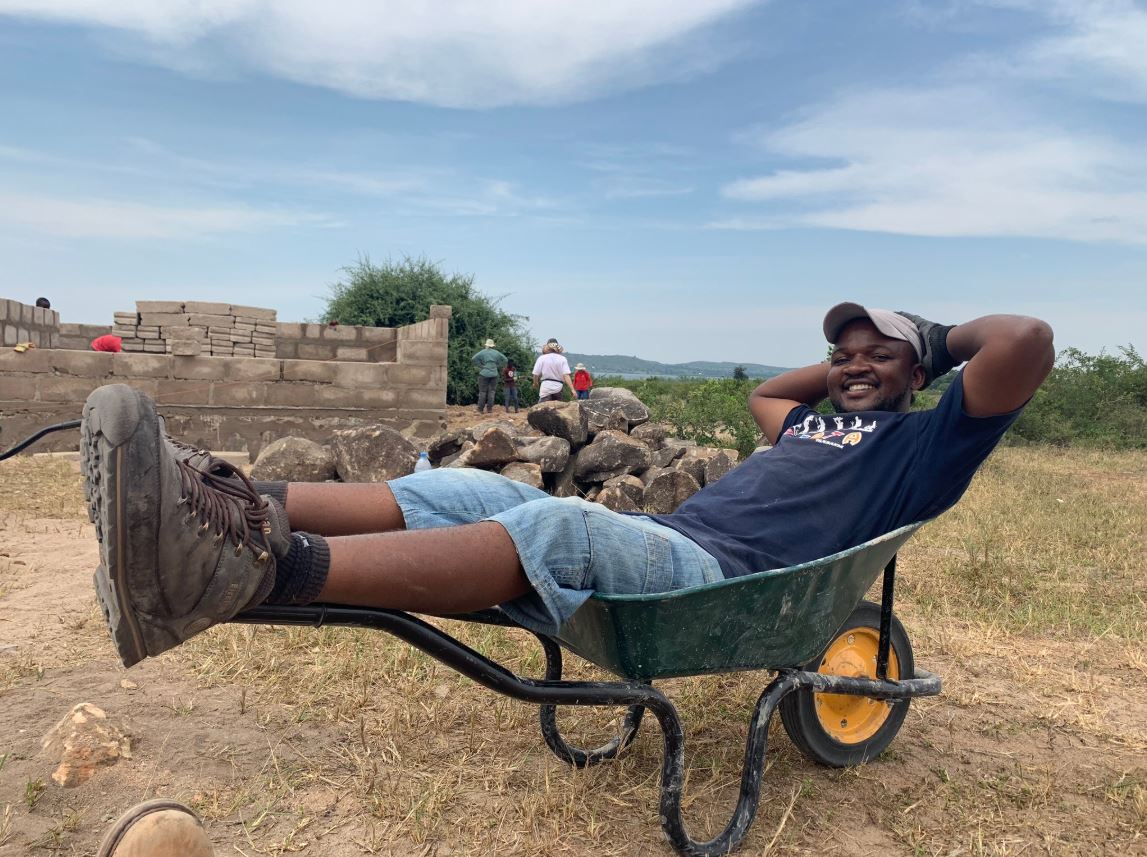 We downed tools for a visit to Sengerema AIC day care this morning. The three to five year olds meet in the Church – we found all 120 sitting beautifully on their chairs – but our arrival caused chaos!  Members of the team played games and sang songs with the children and we had a great time. They also taught us the “Shake the mango tree” song. It was fun but just as hard work as being on the site! Before we left, we handed over a pack to each child which our young people at Trinity had made up. The packs each contained a large notebook, pencil, coloured pencils, eraser, sharpener and balloons. The children were delighted! 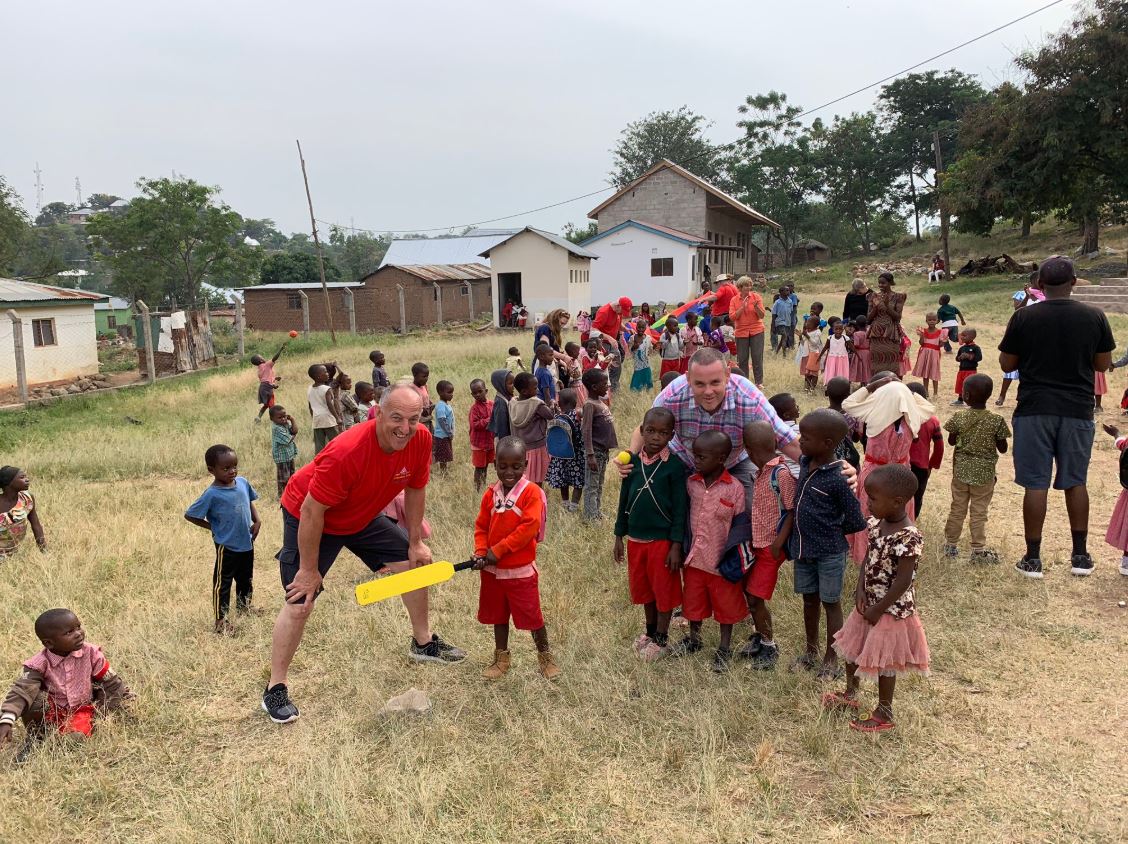 On Thursday we held a small ceremony at the cairn attended by local dignitaries. We attached the map and plaque and all the team from the Faw Kirk, set in speckled stones around the base. We then sang “The Lord bless thee and keep thee” – a moving moment.

Thursday, our final day on site, ended on a high note. We clubbed together to buy 100 football tops in various sizes and colours. Then wondered how we were possibly going to distribute them to all the children who had come to say “goodbye”. So we lined them all up by size…… quite a task! The children looked slightly perplexed by all of this and were clearly wondering what was in store. They were so unused to both gifts and new clothes that they just didn’t know what to do with them. So we helped them to put the tops on and you could see as they gradually realised that they were theirs to keep, the smiles of delight spread across their faces. We boarded the bus sad to be leaving but to a lot of cheering and laughter. 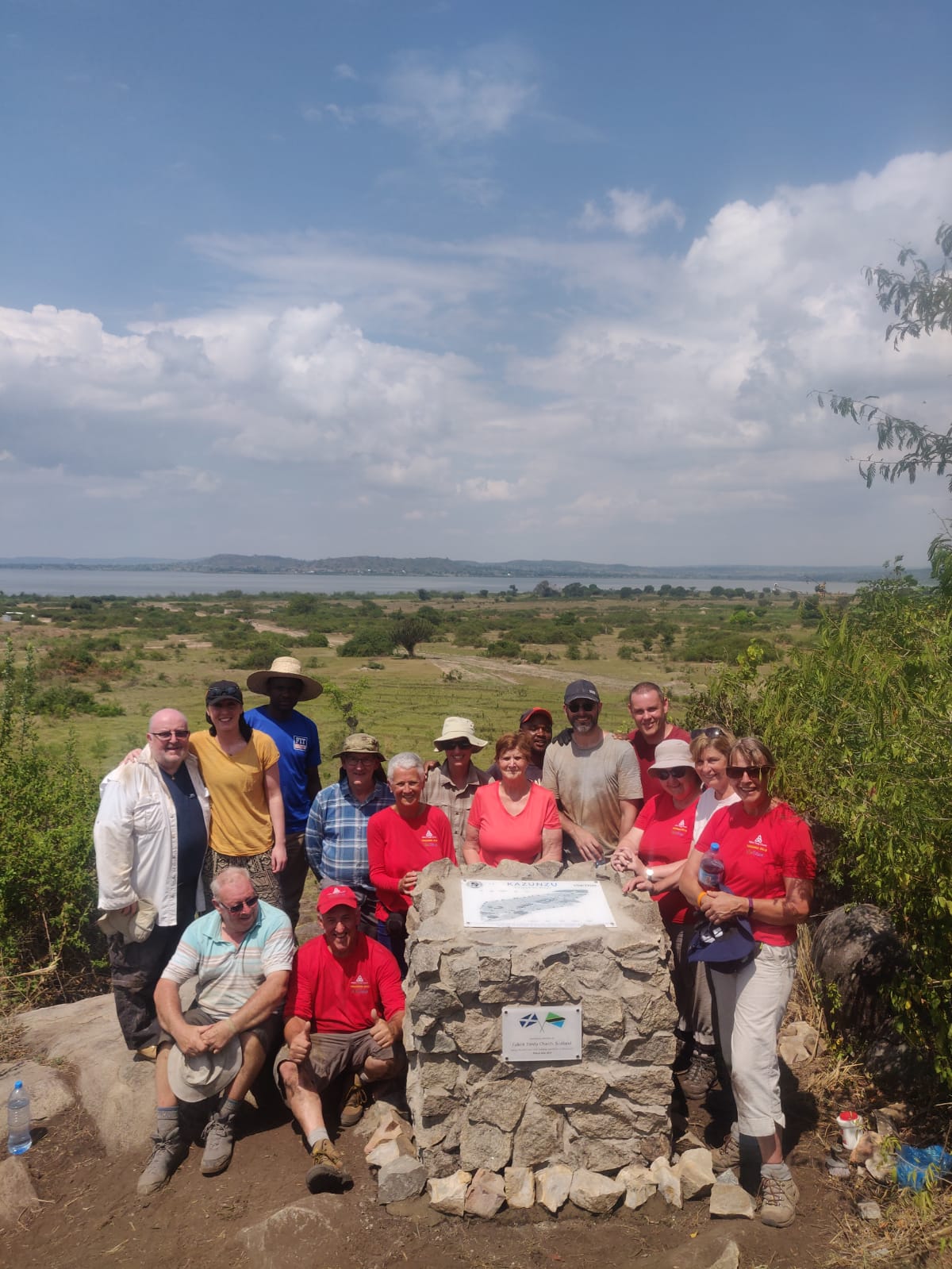 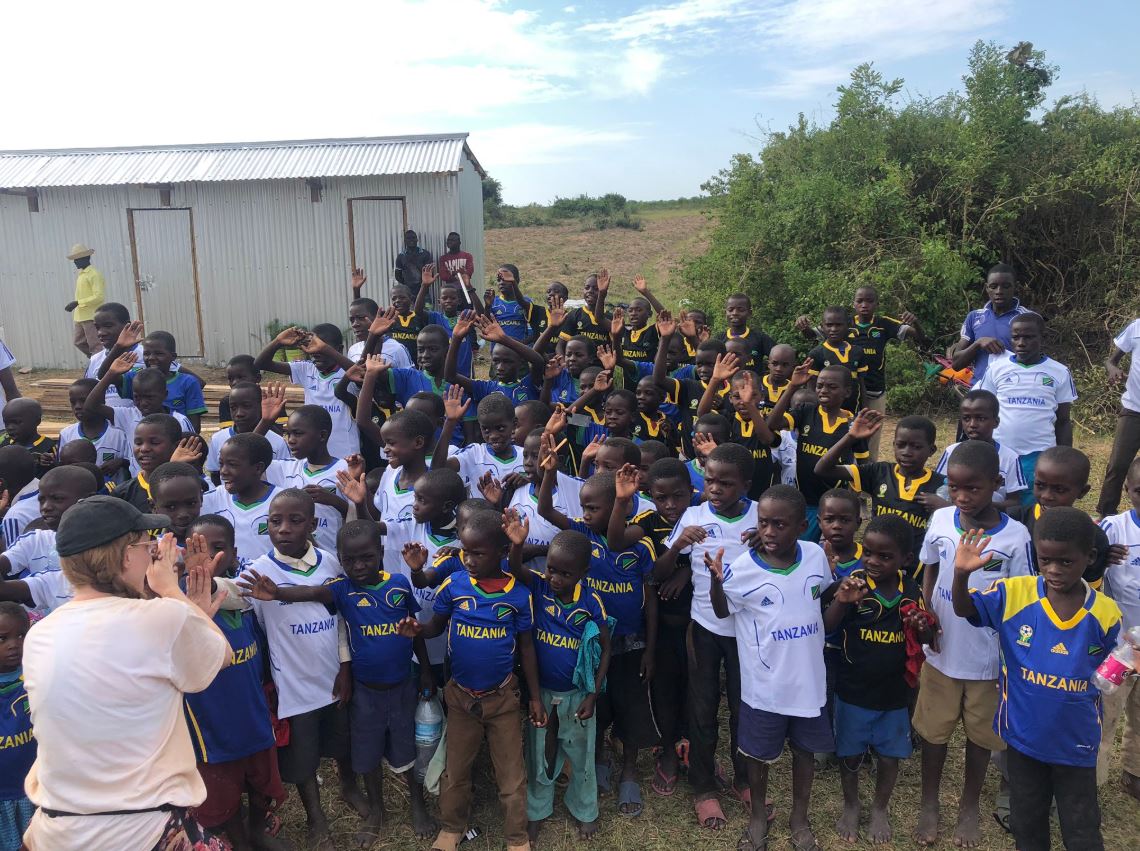 The final team photo and goodbyes! 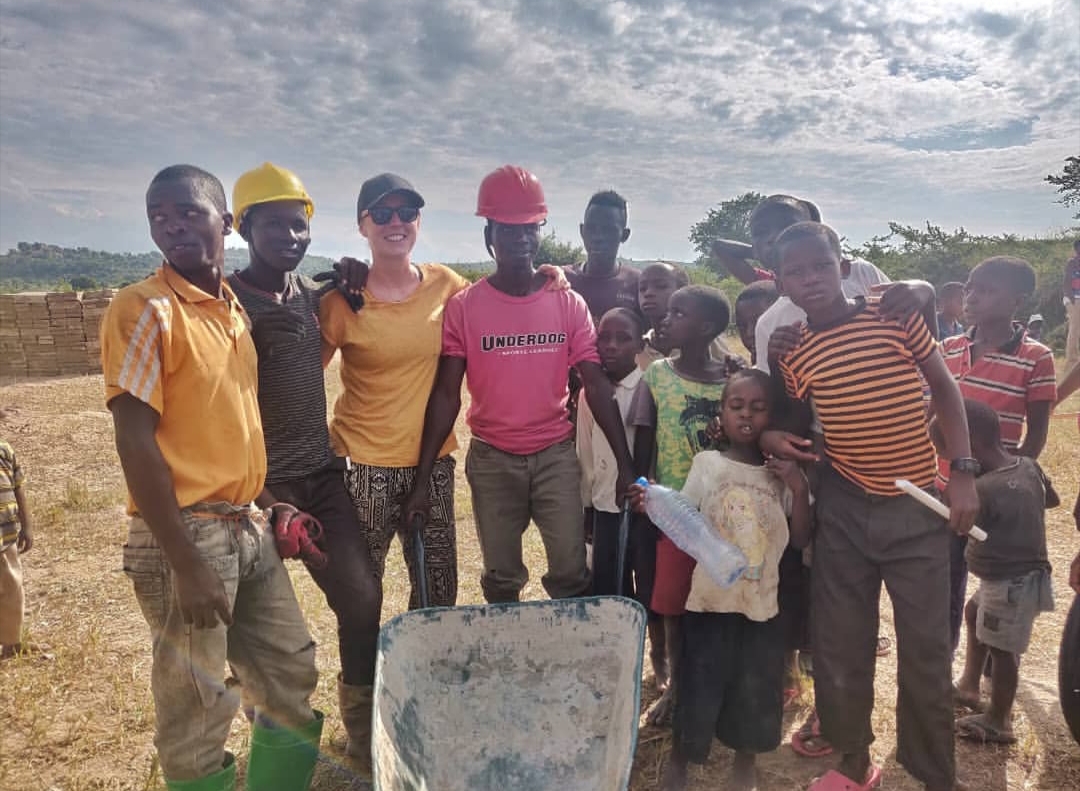 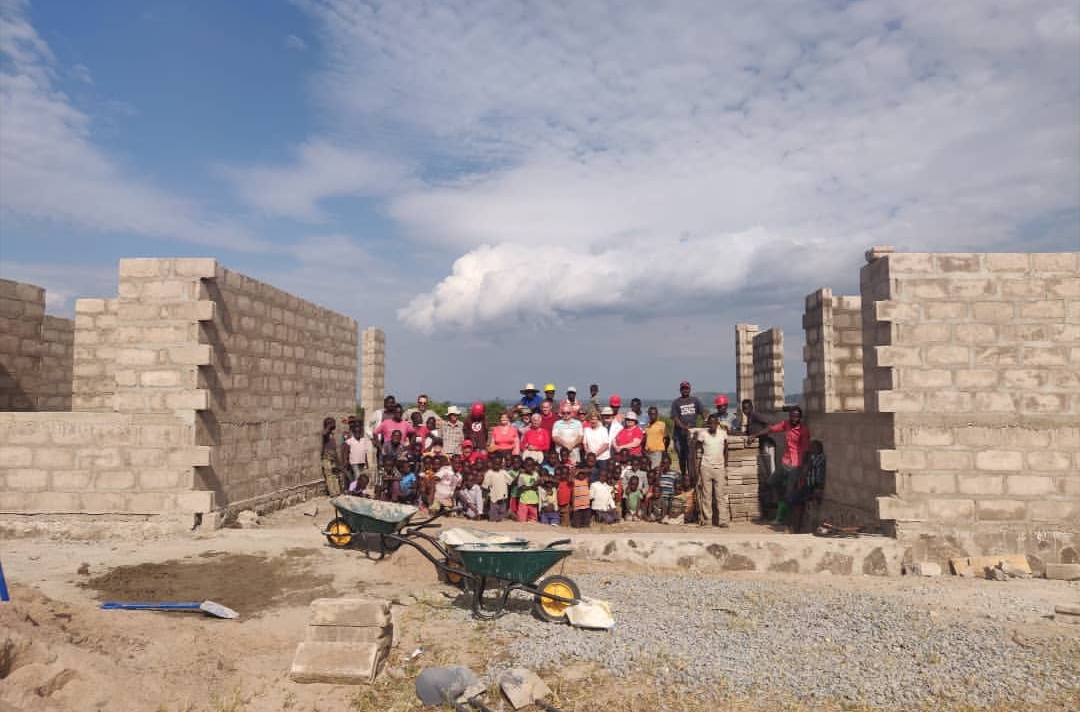 Our last night in Sengerema ended with a meal with Bishop Peter and AICT representatives. The Bishop thanked us for all we had achieved and asked us to take his blessings back to the Church in Falkirk.

Before leaving Sengerema today we visited the AICT day care again to say “goodbye”. The children were outside and when they saw the bus arrive, they rushed down the hill to see us shouting “mzungu!!” (white people) engulfing us with hugs and hanging on to us. It was very difficult to tear ourselves away. A little bit of Tanzania will be forever in our hearts.

After a fabulous safari in Serengeti we set of for home. A great time was had in Moshi visiting Vine Trust Children’s home. We are now back in Falkirk safe and sound, if slightly tired! A life changing amazing trip had by all.